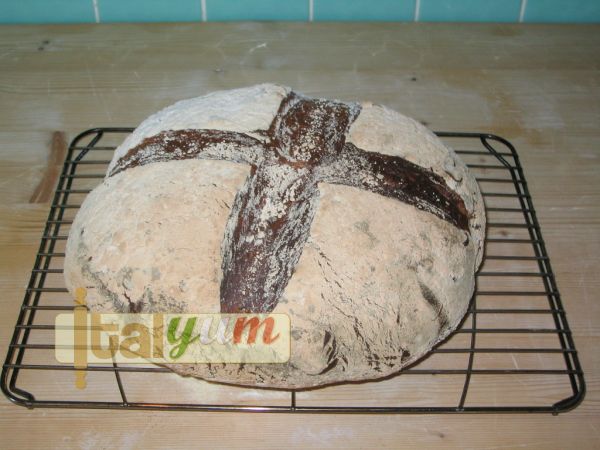 This recipe for home made bread is the one I use the most, especially when I am in a hurry and need to make bread for the family. Forget the long hours fermentation process, like for the sourdough bread or bread prepared with a pre-ferment (i.e. biga, poolish & Co.); here I am using the “straight dough method” with a bit of autolyse at the very start of the process. If you are not a seasoned home baker and you are feeling an headache because of words like “straight dough method” or “autolyse”, don’t worry….just follow the recipe directions and forget about the words; in just 4 hours you will have a fantastic bread loaf, characterised by flavour, good colour and a lovely open texture.However, if you want to know more about the two techniques I have applied for this recipe, I suggest you Google the following:Straight dough methodAutolyse, Raymond CalvelThat’s all you need to know!!Now, let’s start with the recipe.Before you start, be sure you also have a baking stone, a bread proving basket (1 Kg capacity) and a bread/pizza peel for domestic ovens. The bread proving basket will need a handful of rye/wholewheat flour and the bread/pizza peel will need a handful of coarse semolina (read the recipe directions and you will see why).
5 from 1 vote
Print Recipe Email Recipe Share on Facebook Pinterest Recipe
Prep Time 4 hrs
Cook Time 40 mins
Course Main Course
Cuisine Italian

Keyword Bakery
Tried this recipe?Let us know how it was!