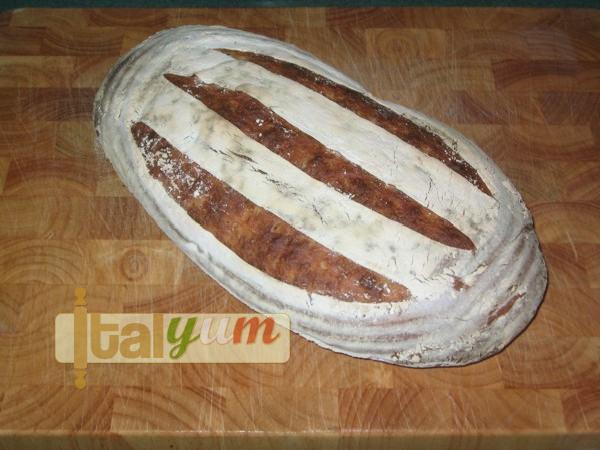 This is the Tuscan style sourdough bread I make at home. To make this bread I don’t use baker’s yeast (also know as compressed yeast), but I use natural leaven. It’s the way people used to make bread for centuries, before baker’s yeast was invented. Those who are familiar with making sourdough bread, know very well the exceptional quality of this type of bread and once you start making bread with this method; there’s no way back! Natural leaven is a huge topic, so huge that it would be impossible to talk extensively about it, here, just now. The purpose of this recipe is to show how to make bread with natural leaven, not to show how to create a starter-culture. However, if you are intrigued by this topic and you want to know more, here I have some key words for you, that you can search in internet:Natural leavenBread starter cultureSourdough starterSourdough breadIf that is not enough and you are really desperate for extra advice, then you can contact me (Federico) directly through the “contact us” form you can find in the Italyum website; I will be more than happy to answer your questions.In Italy, the natural leaven is called “lievito naturale” or “lievito madre” (the mother) and it is regularly used by the Italian artisan bakeries to make large regional breads like toscano and pugliese for example. Lievito naturale has a stiff consistency; this is particular to Italy as generally the majority of starters are of loose consistency, like a batter (or similar to a poolish consistency, for those who are familiar with bread making terminology).I have created this recipe because during the daily routine of refreshing/feeding the lievito naturale, you only take a small part of it (from the previous day feed) and mix it with fresh flour and water. The remaining lievito naturale is usually wasted in the bin, because otherwise you would end up with several kilos of lievito naturale, which is unpractical unless you want to make bread on an industrial scale. I was fed up with all this wastage, so I have found a way to utilise the remaining lievito naturale to make this simple bread, which is made with only two ingredients (water and flour), because the leaven is already made with only water and flour.Now, coming back to the pane toscano, what you need to know is that in Tuscany they do not use salt when making bread. It’s weird, I know, but once you get use to it, you will love it! Apparently the choice of not using salt is because their food is already rich in salt; think about the salty cured meat they have in that region or the salty Pecorino cheese or the Caciucco fish stew and the no-salt stand will make sense!Let’s see how to make it………..Before you start, be sure you also have a baking stone, a bread proving basket (1 Kg capacity) and a bread/pizza peel for domestic ovens. The bread proving basket will need a handful of rye/wholewheat flour and the bread/pizza peel will need a handful of coarse semolina (read the recipe directions and you will see why).
5 from 1 vote
Print Recipe Email Recipe Share on Facebook Pinterest Recipe
Prep Time 17 hrs
Cook Time 45 mins
Course Main Course
Cuisine Italian
Calories 650 kcal

Calories: 650kcal
Keyword Bakery
Tried this recipe?Let us know how it was!