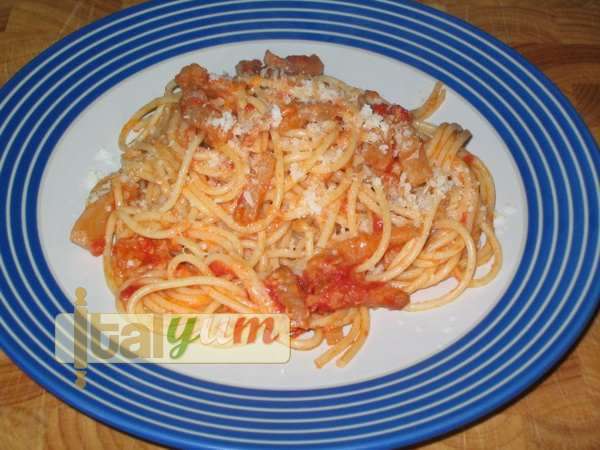 This classic dish has its origins in central Italy; more precisely from the town of Amatrice, in the province of Rieti (Lazio region). At the entry of the town there’s a welcome sign post saying:AMATRICE955 m s.l.m. (955 meters above the sea level)citta’ degli spaghetti all’amatricianaThere is lot of debate around this dish name because local purists say that the dish should be called “matriciana” and not “amatriciana”, since the local people of Amatrice are called “Matriciani”. But, the same purists say that spaghetti should be used for this dish and not bucatini. The debate is so heated that someone has also created a specific website matriciana.com, where they make a big point about their views. It is believed that the ancient version of dish was created by the local shepherds, a few centuries ago. Initially, there was no tomato in the amatriciana sauce, because at that time people probably didn’t know about its existence or its culinary application. This initial version, without tomatoes, still exists and it is called “pasta alla gricia”. Then, in the late 1700s, the use of tomato, as a cooking ingredient, began and suddenly someone discovered that it was good to add tomato to the basic “gricia” sauce and this is what nowadays we know as amatriciana sauce.Rome is not far away from the town of Amatrice and soon the dish had become one of the Rome classics, with the usual variations on the theme, like the use of bucatini or rigatoni pasta instead of spaghetti and sometimes the adding of onion or garlic. There is a common thread between “pasta alla carbonara”, “pasta all’amatricana” and “pasta alla gricia”; all the three dishes come from the same area of Italy and require “guanciale di maiale” (cured pig’s jowl or cheeks) and Pecorino cheese. If we say that a Pasta alla gricia is a carbonara without egg or an amatricana without tomato, I think it is a good and fair way to put it, so you know the differences now.The recipe I am going to show is done in the Amatrice way, using proper guanciale and frying it in an iron pan. Now, let’s cook.If you want to eat the real Spaghetti all’amatriciana, you need to find some “guanciale”. It is the essential ingredient for this recipe and its flavour is far superior to the flavour of pancetta, which is often used, for these kind of dishes, as substitute to the guanciale. However, using pancetta or unsmoked streaky bacon is not a crime and, as I have said many times, if you don’t find an ingredient, then go for the practical approach and find something similar; it will do the job.
No ratings yet
Print Recipe Email Recipe Share on Facebook Pinterest Recipe
Prep Time 5 mins
Cook Time 12 mins
Course Main Course
Cuisine Italian
Servings 4
Calories 650 kcal