Here is another quick Italian classic: linguine with clam sauce. Be sure that the clams are absolutely fresh and properly cleaned from the sand that they may contain. Lunch or dinner, it's just pure indulgence!
No ratings yet
Print Recipe Email Recipe Share on Facebook Pinterest Recipe
Prep Time 10 mins
Cook Time 15 mins
Course Main Course
Cuisine Italian
Servings 4
Calories 650 kcal 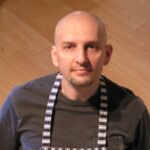