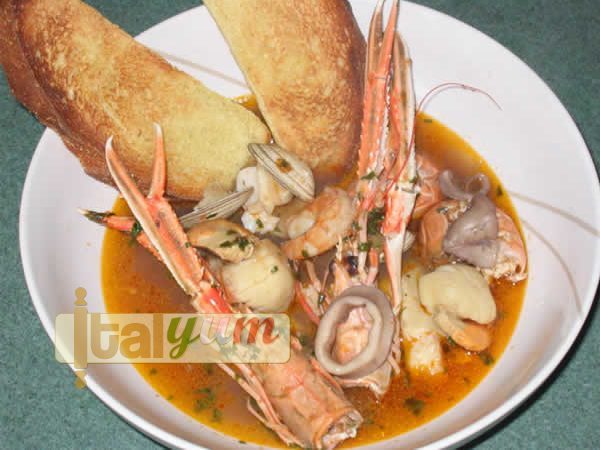 In Italy there are many varieties of fish stew, probably one for each region on the coastline. Each one has a distinct regional name: cacciucco, ciuppin, burrida, brodetto friulano are just some of the ones I can name. Furthermore, the recipes can also vary from town to town or even family to family depending on the local culinary traditions, the type of fish available etc.; but this is Italy and you will never find the Italians all agreeing on something! Here, I am going to show how to prepare the caciucco, my favourite, which you can taste if you have the chance to go to the town of Livorno in Tuscany. This dish is similar to the French "Bouillabaisse."Now, to keep it simple, a good Italian fish stew requires a mix of white fish and shellfish. You need some whole fish called "pesce con lisca" (whole fish with bones) that you will only use for enhancing the stock and some fish called "pesce da taglio" (usually boneless large round fish sold in cutlets or fillets). About shellfish, you need some crustaceans and some molluscs. Having said that, you can prepare a fantastic fish stew using the varieties of seafish available in your area, no matter if you live along the mediterranean coastline or in the northern most part of Europe.I live on the West coast of Scotland and I have never had any problem finding what I need and I cannot taste any difference between the fish stew I prepare here and the fish stew I used to prepare in Italy. All you need is a good fishmonger!When buying fish just remember that the varieties of fish you can find at the fishmonger are not present throughout the year, so you need to be flexible and identify the closest possible substitutes (that comes with experience).Notes:The above fish varieties are what was available at the fishmonger (West coast of Scotland – early August 2006).The original recipe would require 1 red mullet, but not being available I used a sea bream instead. Anyway, in this recipe the gurnard, the sea bream and the John dory are used only for stock enhancing.Baby octopus or small cuttlefish is what I would have used if I was in Italy, but being difficult to find here in Scotland, I used small squids instead (including their heads which actually look like a small octopus).Finally, the original recipe would require also some "cannocchie" (mantis shrimps). In Italy we have plenty and we use one or two mantis shrimps per person. Them not being available, I used langoustines, which are perfect for the job.Before starting to cook, we need to prepare the fish, so check “fish preparation” in the top tips section of the website.
No ratings yet
Print Recipe Email Recipe Share on Facebook Pinterest Recipe
Prep Time 1 hr
Cook Time 1 hr
Course Main Course
Cuisine Italian
Servings 6
Calories 650 kcal