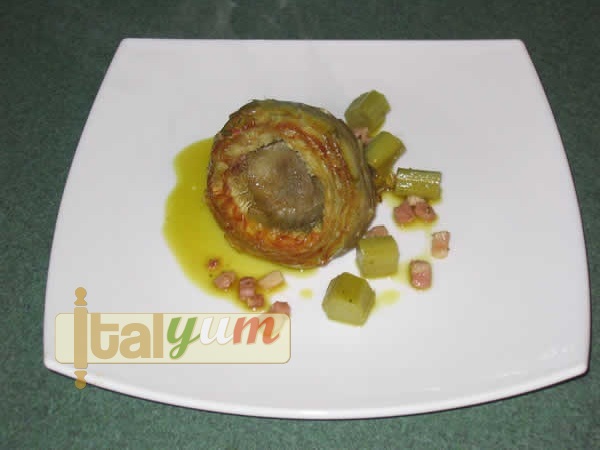 This recipe, in my view, is one that epitomises the character of Italian cooking: total simplicity and tastiness!Artichokes are good, healthy and versatile as an ingredient; you can fry them, stuff them, use them to top pizzas, cook them in the oven together with lamb and potatoes or, as I do, cook them with panchetta. In Emiglia Romagna region of Italy I saw people cooking artichokes, including the stalk, without making any fuss about how fibrous it could be! When preparing artichokes, there is a lot of wastage because usually you eat only the heart of the artichokes, but in the old times nothing was wasted, even the leaves were boiled and eaten as Italians do with "pinzimonio" (raw vegetables dipped in olive oil). I like to use everything from the artichoke, especially when I pay the £ 1.50 per head; and also beacuse I strive for honest home cooking, and economy still matters!
5 from 1 vote
Print Recipe Email Recipe Share on Facebook Pinterest Recipe
Prep Time 20 mins
Cook Time 20 mins
Course Main Course
Cuisine Italian
Servings 6
Calories 650 kcal

Calories: 650kcal
Keyword Vegetable
Tried this recipe?Let us know how it was!