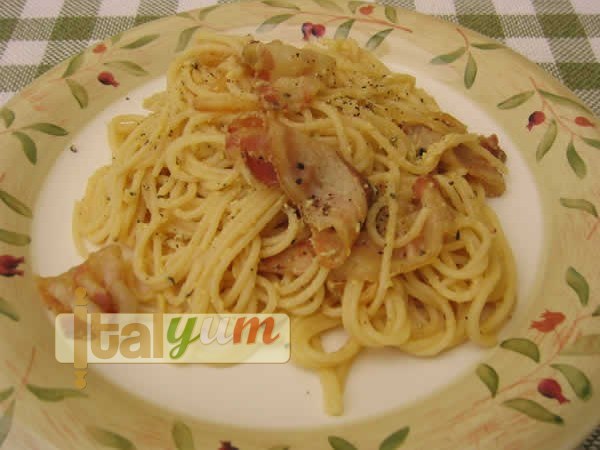 There are many stories about the origin of the name "Carbonara", but I wouldn't bet on them! Researchers have yet to find any reference of this dish in old original recipe books. It is likely that the dish has probably been invented later, in the 20th century; probably during WWII time, when the Americans consumed large amounts of bacon and eggs. It is from this that, maybe, someone started to create a carbonara sauce to top pasta.Another story, not supported by any official records, says that the dish gets its name from the Italian word “carbonari”. “Carbonari” were the foresters making charcoal (”carbone di legna”) from wood in the central mountains (”Appennino”) of Italy. These men, living probably in the 19th century, allegedly invented this rustic dish.It is a dish that requires some skill because timing is important when adding the egg mixture at the final stage. Certainly, it is a recipe which you may have to try a few times before getting it just right.If you want to make the CLASSIC CARBONARA, as most people do in Italy, especially in the Lazio region, then follow my directions but SKIP the wine & onion stage. However, there is a growing minority of people who add onion to the carbonara, because this is the way they like it (and I am one of them); it is one of the many variations existing in the country and if you want to try it, then follow my directions in full, by adding the two optional ingredients listed.About the salt: Spaghetti is boiled in salted water, the bacon is salty and the Pecorino cheese is salty, so take care seasoning with salt!Note: I suggest using thin slices of streaky bacon (pancetta tesa) because this is what you can easily find if you live abroad. In Italy, for this specific dish, it is a must to use diced “guanciale” (cured pig jowl or cheeks). I is important that the streaky bacon is unsmoked; lightly smoked or smoked bacon will make the dish a bit too rich and some people would find it too strong. I did the recipe using streaky bacon cut in thin slices (it cooks evenly), however you can dice it if you prefer to do so.
5 from 1 vote
Print Recipe Email Recipe Share on Facebook Pinterest Recipe
Prep Time 15 mins
Cook Time 12 mins
Course Main Course
Cuisine Italian
Servings 4
Calories 650 kcal